2013 Festival Honoree of the Year 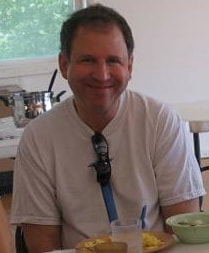 It is our great privilege to announce that our 2013 Festival Honoree of the Year is Larry Denenberg. Larry has dedicated a tremendous amount of his life to Israeli dancing. Long time Festival participant and former committee member Becca Rausch says, “For decades, Larry has been an invaluable member of the Israeli dance community in Boston and beyond, as a performer, teacher, session participant, programmer, and host to many guests from around the world. We are fortunate to have him. I am so pleased that Larry is the fourth annual Boston Festival Honoree; it is an important recognition of all his contributions.”

Larry was born and grew up in Omaha, Nebraska, where, as he says, nobody had ever heard of Israeli dance. He moved to the Boston area for school and has been here ever since, working in the computer world. Larry discovered Israeli dancing at MIT in 1977, after hearing about the lopsided gender ratio from dancing roommates. He taught his first Israeli dance in 1978 and first programmed in 1979, eventually becoming a regular programmer at MIT Wednesday Israeli dancing. Gil Preuss, Executive Vice President of Combined Jewish Philanthropies and fellow Boston Israeli dancer, says, “There is no other Israeli folkdance instructor quite like Larry. Not only do you learn the dance but you learn math at the same time.”

Khamsin, 1986
​
Larry performed in his first Boston Festival in 1986 with Screaming Sa'adya and the Electric Camels (then called Khamsin). Since then, Larry has been a member of several groups, including Zikukim and Neshikat Hagamal, performing in the Boston Festival, the New York Festival, and at NEFFA. In 1988, Larry went to Israel with Bustan Boston, one of four groups that represented North America at the first Karmiel Dance Festival. Of late, Larry has been a regular member of Sucaria, this year performing in it with both of his children. Becca, who danced with Larry in Zikukim, continues:

The thing about Larry is that he is infectiously enthusiastic about Israeli dance. He believes in Israeli dance as an art that brings people together as a community while maintaining the capacity to teach about history and culture. He is dedicated to preserving the foundations of Israeli dance, a master teacher of the traditional styles, and an expert debka performer. Simultaneously, he is also dedicated to making Israeli dance accessible to future generations. While he shines in both capacities, the latter is really something, for there is nothing quite like watching the pure joy exude from Larry when he dances with his daughter, Ayla. (Indeed, Larry started Ayla in Israeli dance when she was at the ripe old age of 2 months; the two made a cameo appearance in the premier Sucaria Boston Festival performance.) 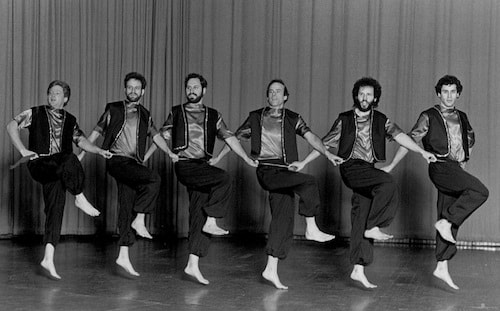 Screaming Sa'adya and the Electric Camels, 1992

​Larry's audacious sense of humor and excitement about Israeli dance have caught the attention not only of the Boston Israeli dance community but of the Israeli dance community around the world. Israel Yakovee, whose choreography won the second place prize at the Karmiel dance competition in 2009, says, “Larry is an extremely smart person and a pleasure to be around. He has been a devoted Israeli folkdancer for many years and loves Moshiko's dances. To my surprise he respects my dances too. I thank you, Larry.” New York based choreographer Moshe Eskayo lovingly says, “Larry Denenberg is crazy.” In fact, Larry's family has had dances choreographed for them by two different choreographers, Debka Larden choreographed by Moshe Eskayo for Larry's 50th birthday and Shai L'Ayla choreographed by Moshiko Halevy in honor of the birth of Larry's daughter, Ayla.

​In addition to Israeli dancing, Larry is also involved with other dance genres. He has been a regular programmer at MIT Sunday International Folk dancing. Larry has also called at MIT Tuesday Contra dancing. To this day, he is a regular workshop leader at NEFFA.

​We hope that you will help us honor Larry—his talent, passion, enthusiasm and joy—by contributing to the Honoree Program and the continuation of the Boston Festival.