2010 Festival Honoree of the Year

It is our great privilege to announce that our 2010 Festival Honoree of the Year is Miriam Rosenblum. Miriam has dedicated a tremendous amount of her life to Israeli dancing and our Festival in particular. As Miriam explains, “Folk dance is in my genes–my parents are both folk dancers; I have been involved in Israeli folk dance since childhood; and now my daughter is a folk dancer. In my perfect world everyone would be dancing.” Miriam has helped to create pieces of that perfect world for over three decades. She has directed Israeli dance performance troupes, staffed Fred Berk’s Israeli dance camp, created and produced Cincinnati’s Israel Folk Dance Festival, and taught workshops both in the U.S. and abroad.
Miriam with Hamakor in 1980
Here in Boston, Miriam has been a pivotal participant in, and supporter of, our Festival since the 5th performance in 1981, when she graced our stage as a member of the legendary Hamakor Israeli Folk Dance Troupe, a robust group with so much talent in the late 1970’s and early 1980’s that its own annual show filled Kresge Auditorium. Miriam continued to dance with Hamakor in 1982 and 1983, while simultaneously working on the Festival behind the scenes through her position as the Director of Student Activities at MIT Hillel. In 1993, Miriam became the Director of MIT Hillel, a position she held for 15 years. As one of the many innovative programs she led at MIT Hillel, the Israel Folkdance Festival of Boston was always near and dear to her heart. Throughout her 27-year career at Hillel, Miriam served as the Festival’s primary contact with MIT, booking our space at Kresge (not a small task!), managing our relationship with the institution, and supporting the Festival from within MIT and Hillel. Her experienced eye has provided the Festival with feedback on each year’s performance that has improved the show immeasurably.

With her recent retirement, and as we lose her valuable oversight, it is especially appropriate that we take this opportunity to honor Miriam Rosenblum as our first Festival Honoree of the Year, in recognition of her many years of support without which the ongoing existence of the Festival would not have been possible.

"I am honored to have had a role in sponsoring the Israel Folk Dance Festival of Boston during my almost three decades at MIT Hillel. The Festival is important not only as a showcase for Jewish and Israeli culture, but as a forum for new generations of dancers to share in the great tradition of Israeli dance. I hope that this spectacular event will continue to flourish."
-Miriam Rosenblum
​ 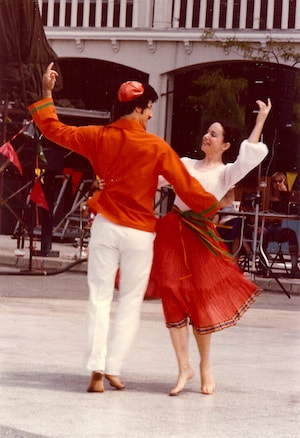 As Bob Randolph, MIT’s first Chaplain to the Institute and one of Miriam’s long-time colleagues said, “Miriam has made much of balance, energy and a sense of beauty, and like the Israel Folkdance Festival, she is a treasure!” We hope that you will help us honor Miriam and keep our treasured Festival alive.
​